How to Reset Windows 7 Password with or without USB Disk

Part 1: How to Reset Windows 7 Password with USB Disk 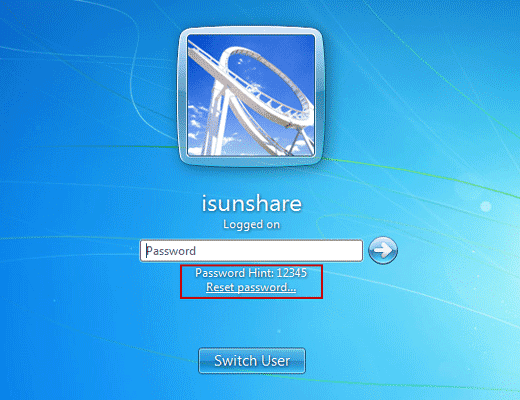 Installation disc is used to reinstall Windows 7 or repair Windows 7, in order to remove forgotten Windows 7 password. So make sure important data has been back up previously. 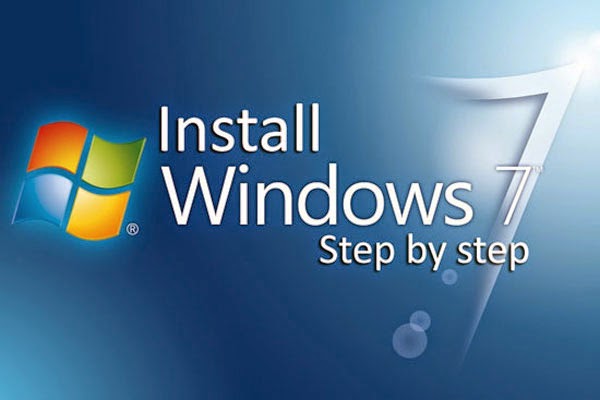 After it completes successfully, you will get Windows 7 clean install. Previous Windows 7 password has been removed. Now there has been no password for Windows 7 default administrator. So now you could login into Windows 7 computer without password.

Part 2: How to Reset Windows 7 Password without USB Disk


Windows server 2012 also removes “Start” menu from taskbar. Maybe there are so many server computer users unhappy about it, but this is truth. Now let’s see how we can find traditional “Start” menu.

Actually, “Start” menu has not disappeared. It is just removed to the left bottom side of traditional desktop. But users couldn’t see it only if move mouse there. Click it, and experience new functions setting in Start menu, including Server Manager, Task Management, Computer etc common applications. Double-click the application picture, and it opens. If click it, we can delete or remove it. If we want to turn back to desktop, just click “Desktop”. 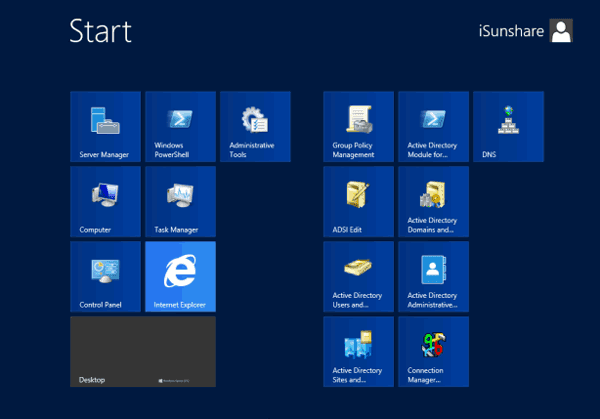 Or move the mouse to the right bottom side of window, and you would see “Start” menu like in Windows 8, click it and Start screen appears.

Tip 2: How to find software or tools in Windows server 2012


In Windows server 2012 start screen, what we can see is not what we think of. There are so many tools and software that we don’t know where they are. In fact, it is simple. We just need to right click in the blank section of Windows start screen. And then there would be a option “All Apps” pop up in the bottom side. Click it and we could see the tools page.

In the tools page, we can see effective tools in Windows server 2012. If we use one application usually, we can right click it and add it to desktop, taskbar or login with administrator etc.

Tip 3: How to shut down Windows server 2012 computer fast


Windows server 2012 shutdown problem also troubles computer users because of no “Start” menu on traditional desktop. So sometimes we could only shut down server computer with Task Manager. It is helpless. Now this passage summarizes four ways to shut down Windows server 2012.

1. Press Windows + I or move mouse to the right bottom side of desktop, Menu and Toolbars. Click “Power” and "Shut down" Windows server 2012. 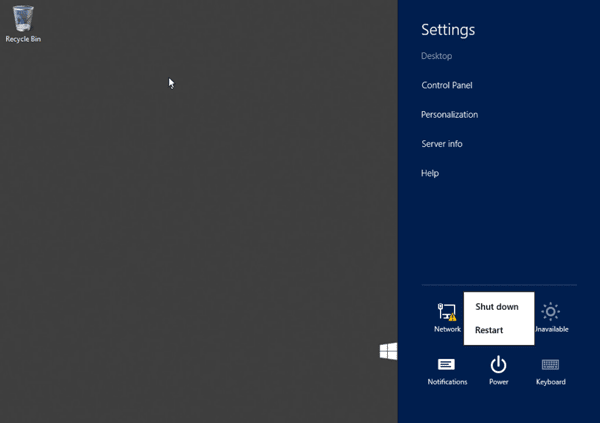 4. Press Windows + R to run command “shutdown.exe -s -t 00”.
Run command prompt with administrator, type in “powercfg/H on”. “Power” option is open. Click “Must type password when wake up” in the left side, and tick the “Fast Boot”. And you could start and shut down Windows server computer fast.

Refer to: How to enable fast boot and shut down Windows server 2012

Tip 4: How to adjust performance to optimize programs 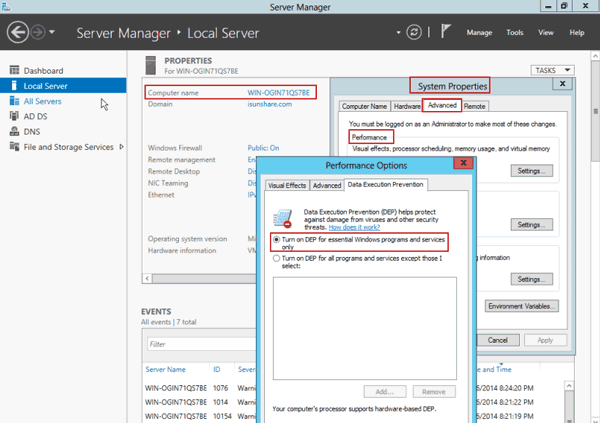 Tip 6: How to not boot Server Manager when Windows logon Upgrade to Which Windows System after without Windows XP

With the Microsoft announcement about stopping support Windows XP since April 8 in 2014, Windows XP users have to make hard decisions. Go on running Windows XP, turn to use Linux or upgrade to Windows new operational system? According to the survey, there are still many people choose to use Windows XP in later few years. The problems Windows XP users need to mention have introduced in where to go if without support for Windows XP.

For computer users who have been accustomed to using Windows XP in previous few years, suddenly turn to run Linux instead of Windows XP is hard to adapt. Believe more and more people would choose to upgrade Windows XP to new operational system, such as Windows 7 and Windows 8, except those persons who are obsessed with Windows XP.

Now, all PC computers and laptops can be upgraded to Windows 7/8. So now let's discuss the problems necessary to be thought about during choosing which Windows system instead of Windows XP.


Does Windows XP computer hardware configuration satisfy the conditions to upgrade to Windows 7 or Windows 8?

Windows 8/8.1 is not designed to run in Windows XP old computer. So if you prepare to upgrade to Windows 8, suggest run Windows 8 Upgrade Assistant to check whether old computer has achieve the lowest demand.


After making sure computer hardware configuration, we should consider selecting which operating system according to its ease-of-use. On similarity, Windows 7 is more similar to Windows XP on interface. It would be easy to know Windows 7 well more quickly than Windows 8. But it would take more time and disk to install nearly about 100 patches.

And Windows 8/8.1, there have been so many changes on interface. Computer users have to spend more time to be familiar with it. Compared with Windows 7, Windows 8 doesn’t need to install many patches and Windows system boots more quickly.

At last, let's see how new Windows operational system would influence our computers after Windows 7 or Windows 8 installation.

Whether operating system would influence the programs running in previous Windows system?

This is the problem we always worry about after Windows system upgrade. CD-ROM or USB flash drive is needed to fully install Windows 7/8/8.1 in Windows XP old computer. Therefore, all the users' files and programs previously installed on this computer could not be moved automatically. Computer users have to reinstall all programs new version manually applying to Windows 7/8, and copy user files to new operating system.

Tips: How to move files from old operational system to new one

Where Should Go If No Available Support for Windows XP

Since Microsoft announced they would quit providing security patches and system repair for Windows XP, and appealed to upgrading to Windows7 or Windows 8, different kinds of speculations appear. Where would Windows XP users go?

There are three choices available for them.
I think insist on using Windows XP is the last step when there is no support from Microsoft. But it is surprising that, according to the research in last December, still 29% PC users and laptop users are using Windows XP. And Windows XP accounts for 32% of the whole Windows systems. This is a very large proportion.

Why there are still so many people choose to insist on using Windows XP? Possibly because:

1. The newest version of Windows system, Windows 8 is not credible enough.


Even though Windows 8 integrates all features of PC and tablet, and brings new experience to Windows system users, it still ignores the real demand of laptop users, because laptops are not taken with tough screen. Besides, for Chinese computer users, auto input method framework is not suitable. And it’s hard for them to delete Microsoft auto input method and switch between Chinese and English.

2. Windows XP is still able to work for computer user.


When considering Windows XP is still a nice Windows operating system, and lots of cost are needed to upgrade to Windows 7 or 8, it will not a surprise to see many computer users keep using Windows XP.

Because of without Microsoft security support, there are still other software providers willing to support Windows XP running.

For example, most of anti-virus corporations will support Windows XP users in later few years. And especially for Chinese Windows users, Microsoft said it would provide system security support.

But if you insist on running Windows XP, it is necessary to follow some suggestions.

Second, make sure your computer has been protected by security software.
You can consider free anti-virus software from Microsoft or third-party security bundle.

However, as long as you are running Windows XP, the risk is not going.

1. Though there are so much third-party anti-virus software works for Windows XP, hackers would go on to find Windows new loophole. And now there has not been free security support from Microsoft, keep Windows safe becomes more and more difficult.

2. DEP for Windows XP has existed in name only because more and more malicious programs have broken DEP. So when Windows XP goes through the same virus as Windows 8, Windows XP will be more dangerous than Windows 8.

Besides, both OEM and Microsoft hope Windows users could turn to choose Windows 8. From the perspective of Windows system security or computer security, Windows XP replaced is sooner or later in this era of information security. But that is no doubt that Windows XP would still exist in later few years.